After forty years it’s time to give closure to the Flippo family and solve Red Bay’s oldest cold case file.

July 11 will mark the 40th anniversary of the night the home of L.N. and Ruth Flippo was bombed, leading to the death of the former Red Bay mayor and his wife, who had been a schoolteacher here.

“After 40 years there’s a likelihood that whoever set off the explosive or whoever authorized it may not even still be alive, but the family deserves to know once and for all what happened and why,” said News Publisher Jason Collum. “While we are not in a position to offer any monetary reward for information, there might be the possibility that rewards offered back in the 1980s by law enforcement and state authorities might still stand. Either way, it’s time for someone who knows something to do the right thing and end this mystery for the family and the community.”

The News has not reached out to any descendants of the Flippos regarding this case.

In the early morning hours of that hot summer day, an explosion ripped through the home of the Flippos on Seventh Street, less than a block from Red Bay Elementary School. The explosive used was believed to be dynamite, and it had been placed under the back bedroom floor of the home. The blast blew out the back wall of the bedroom, throwing bricks 30 to 40 feet away and splintering the floor and roof. Windows of homes nearby were broken.

Officials ruled out the possibility of a gas line or water heater explosion as the cause.

Rumors were rampant following the explosion. Theories included that the Flippos were not meant to be harmed but the bombing was supposed to send a message of some kind to the couple, both 68 years old. It is thought the person who set off the bomb did not realize the Fippos were home at the time as their car was at a nearby garage being serviced, and they had previously planned to be gone out of town at the time. Law enforcement officials said it is believed Ruth Flippo was awakened around 3 a.m. by the sound of someone removing a grate from the side of the home. It is believed the person then lit a stick of dynamite, put it on a shovel and tossed it underneath the couple’s bedroom.

L.N. Flippo died on the scene; Ruth died about 20 minutes after being taken to Red Bay Hospital.

Law enforcement officials in the months and years following the case said they remained unable to determine a motive for the killings, which rocked the entire community literally and figuratively.

“Everybody I talked to liked them and I still can’t figure out why they were killed,” former Red Bay Police Chief Buford Barker was quoted as saying in a 1985 article in The Birmingham News. 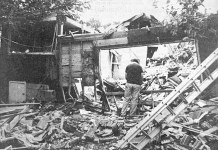 Getting good TV reception was a family affair