Pounds remembered as dedicated mentor, father figure to many 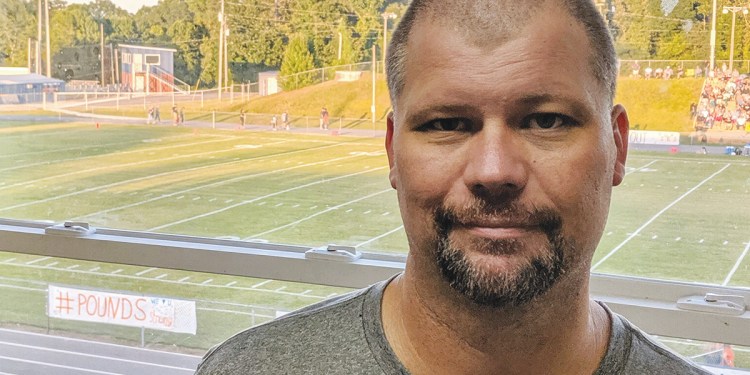 Anthony Pounds may have never known the impact that he would have on so many young lives as he coached, mentored, and acted as a father figure to so many young men. He was not one to boast or brag. A lot of the time he was working hard from behind the scenes.  To most, Anthony was a quiet man who could always be found wherever his boys were playing their game of choice.  He was either on the sidelines, in the dugout, or in the press box at every Red Bay game his boys were involved in.

Anthony, an athlete himself, graduated from Red Bay High School in 1995.  He began coaching and helping with Dixie Youth baseball in 2006.  Over the years, he coached youth league baseball, youth league football, junior high football and varsity football.  He was the head coach for Red Bay’s junior high football team for many years and was still assisting with the varsity team. He was president of the Football Quarterback Club and over Dixie Youth Baseball for a time.

He married his wife, Shay, in 2004 and adopted her three sons, Jade, Jace, and Jake that same year.

“Anthony refused to leave Red Bay,” said Shay.  So, his boys started to school at Red Bay in the fall 2004. “Anthony would drop them off every morning on his way to work,” said Shay. They officially moved to Red Bay in 2007. “He loved his family, he raised his kids in church, and he served his community,” said Shay.

Not only did Anthony dedicate his time to sports, he also served with the Red Bay Lions Club, played Santa Claus at Children’s parties, helped with VBS at First United Methodist Church, and operated the Power Point presentations at FUMC. “Anthony’s family and mine have spent a lot of time together over the years. Many hours of church functions, vacations together, cleaning up tornado ripped neighboring communities, and countless hours of little league sports. Hundreds of memories flood my mind of those times together and I am terribly saddened at the loss of such a great person to so many people. I can honestly say that I do not know anyone that has a bad word to say about him,” said Joey Allen.

“The one thing he would want people to remember about him is that he never gave up, never quit.  His philosophy was to grit your teeth and push forward,” said Shay.

On July 17, 2019, Anthony was diagnosed with Stage 4 Renal Cell Carcinoma which metastasized to his kidney, lung, and liver. Anthony never gave up and was still fighting as he prepared to face more treatments.  However, Anthony was promoted to his eternal home on Thursday, February 25th.  He leaves behind his wife, Shay, sons Jade (Chelsey), Jace, Jake, and Hunter and a host of family and friends that loved him.

From all the kind words that were submitted by many (too many to include) for this section the general consensus is that he is remembered for kindness, caring, compassion, and his Christian faith.  Here are some of those:

When I think of Anthony, I think of all of the encouraging words he shared with me and the football team. ~ Justin Payne

My best memories with Coach Pounds are on the football field where he was more than just a coach but more like a father figure.  ~ Jack West

Anthony played a huge part in my life molding me as a man whether it be showing me kindness with how he would always take players home or to a game or showing me how to just be a competitor. ~ Austin Milam class of 2016

He was always ready to help in any way he could whether it was on or off the field. ~Zack Pounders

The world has lost a great coach and great all around guy.~Bryson Farris

He was such a great Coach and an even better man and always wanted his players to fight their hardest and never give up. ~ Kolby Bragwell

To me Anthony Pounds was a father figure and a role model of what a young man should aspire to be. Anthony and Mrs. Shay opened their doors to me more times than I can count. They always kept me walking a straight path and checked me when I needed it most.~ SGT Beerbower, Christopher

Coach Pounds was such an amazing mentor, man of Christ and many more, I will miss him. ~ AJ Deaton

Coach Anthony was more than a coach, he was a friend.~Elijah Ingle

Coach Pounds was extremely dedicated to not only coaching but also making an impact in every single one of our lives.  Coach Pounds always lifted us up and let us know we did a good job. ~Matt Senkbeil

Best coach I ever had. ~ Arden Hamilton

No matter the situation he was always a beacon of maturity and reason. -Kyle Fuller (Fuller)

Coach Pounds was the definition and epitome of strength. Not just physical, but spiritual as well. He was the first of the coaches to say he was proud of me answering the call to preach and you could see the spirit of God within him. ~ Devin Nichols

He made every player feel important and went out of his way to personally connect with each and every athlete to make them feel needed. ~ Noah Haines

Coach Pounds was a motivation to all the guys that he coached. He treated all of us like we were his own boys.~Bryson Wallace

I often wonder if a man’s life can be measured by how he is mourned upon his exit. If this is the case, Anthony’s life has been immeasurable. He leaves behind a legacy that many men would envy. I am proud to say that I knew him in many capacities. He was a coach, a mentor, a leader, and most importantly a friend. ~Barry Reach

Coach showed me a lot in life, but he always said that God’s number one. Thank you Coach for everything. ~ Alex Kennedy

In life we meet many people but there are a few that leave a lasting deep impression even if they may never realize it. I believe he sat a more important example that all of us guys could learn from in how he lived his life. Coach Pounds lived his life in a way that was, in my opinion, an example to all of us boys about how to be a good father and husband. ~ Levi Humphres

He taught me from when I was a little kid, up until he died, what it means to work hard, love family, and win football games. He was such a good guy that always had a sarcastic sense of humor that would make you laugh every time you were around him. ~ Dylan Hester

He was able to teach us determination, heart, and a fighting spirit like no other could. The thing that always stood out to me about him was the time and effort he was willing to give while expecting no thanks.  If there were ever work that needed done at the field he was there to help, without a single question. ~ Jordan Turbyfill

He taught me a lot of things throughout my life and the most important lesson I learned was to treat people with kindness and to always protect your family. He was a God fearing man and he lived his life this way. Thanks, Big Papa, for all the memories and I’ll see you again, ~ Jamel “The Camel” Anderson

It’s a sad time for our community and football program.  Coach Pounds was an all-around great person and Coach that was a mentor to so many young men.  He will truly be missed. ~ Coach Michael Jackson