RED BAY, AL – James Murl Pendergraph, 52, died Thursday, February 4, 2021 at the Red Bay Hospital. He was born in Red Bay, AL and was the first special needs student to graduate from Red Bay High School, where he received a standing ovation. He was voted Best All Around by the Senior Class of 1991. He loved competing in Special Olympics where he received many awards and was chosen to light the torch for the 1991 Special Olympics. He was voted to be Mr. Sarah Dinsmore at the Sarah Dinsmore Center in Red Bay. He was a true Alabama fan but was easily swayed when a pretty girl was around. He attended New Union Missionary Baptist Church and Cornerstone Church of God.

He was preceded in death by his parents, James Thomas and Wanda Graham Pendergraph, Jr. and a brother, Thomas Pendergraph.

Special thanks to his Dinsmore Center family, Peggy Vick and his many girlfriends that he loved through the years, even simultaneously! 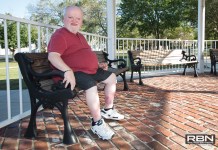