﻿If you’re older like me, there are many memorable times in your life that stick out in your mind as dynamic or something you will never forget. Perhaps it was an event that happened that changed the course of history, or perhaps it was something as simple as something that someone said to you. Either way, whatever it was made you stop and maybe even change course.

We would all have to honestly say that the year 2020 is such a time. When this year started, it looked like everything was going gangbusters and the year ahead looked rather rosy. Had we all had foreknowledge of what was coming, we might have all stayed in the bed!

As many of you have, I have had to say goodbye to some very wonderful people this year. Some of them were dear friends, and some of them were people that I either admired or respected from afar. Many of them were older and had health problems, but many were younger and for all practical purposes should have been with us a lot longer. Either way they are all gone and there is a void where they once were in our hearts and lives.

Then, we all look at our great country and all the chaos, strife and pure evil that seem to be rampant. I can’t tell you how many of my friends and acquaintances that I’ve spoken with all over the country and all over the world who feel exactly as we do. Their response has been similar to ours. They’re asking, “What in the world is going on? Have people just lost their ever-loving minds?” From the looks of things that we see and hear about, it would appear so!

I’m a person who always likes to see the glass as half full. I try to see the best in people and do my best to inspire others or at least to be a good example. Lately I realize just how important that is and how I need to take it more seriously.

Our children, grandchildren and great grandchildren are growing up in a world where good is called evil and evil is called good. They are told that they must conform and accept all that is vile and against God. They are ridiculed at school and at work if they stand for righteousness. They are painted as some sort of freak or weirdo if they don’t fall in step with all of the hate and violence that is permeating all over the land. (We thought it was tough being a kid growing up!)

It is my hope and sincere prayer that better days are just ahead. I honestly believe that we will see better days, or I wouldn’t be praying as I’m presently praying. My prayers are prayers for mercy and even more grace as we face some of the giants that we are now facing. But thanks be to our God, He is so much bigger than any of these giants!

It is also my sincere hope and prayer that we will look back on this year and say, “God got us through it! It was a tough several months, but we survived and are wiser and stronger than ever before!” (I believe that we will be able to say that in just a few short months!)

So looking back on all the sickness, all the shutdowns, all of the heartache and chaos of this year, let us look up to God and say, “Thank You for being there for us!” Because I don’t know about any of you, but I honestly can say that I don’t know how I would have survived emotionally and psychologically during this time without the mercy and grace of God! He has truly been there for me and my family! Oh, there are still some tough days ahead, especially with such an important election about to take place, but we still must find a way to be thankful!

So, when we look back on this year, let us not only look back and say, “Well I’m sure glad that’s over,” but let us also say, “God was really good to us during those difficult days!” So, when it’s all said and done, let us not grumble and point fingers, but let us look up to where our help comes from. For one of the things that we most certainly don’t want to remember about this year is just how poorly we responded in the time of crisis. We want to be able to give a good report!

Garry Lovette is an author and counselor whose articles are seen in more than 135 countries of the world. To comment about his article, or to learn more about him, visit www.theawakened1.com. 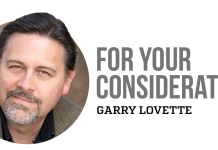 This season has been one blessing on top of another

Of events great and sad