by Jason Collum
in Features, Lifestyle
0 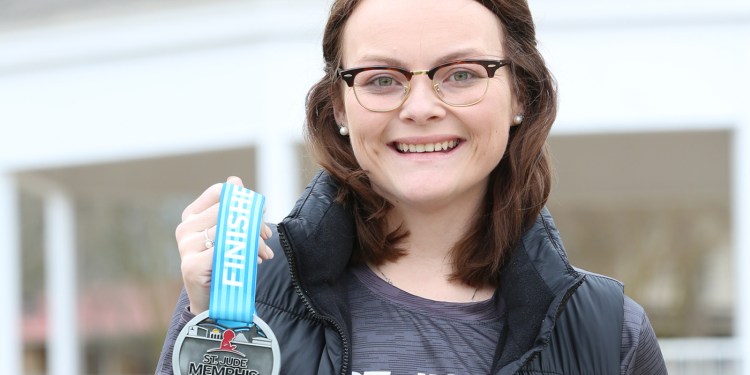 If the last two years have taught Keylee Moore anything, it’s that goals are worth setting, and that sometimes reaching those goals means pushing through pain and doubt.

Moore, 24, of Red Bay and a loan processor at Community Spirit Bank, completed her first half marathon for St. Jude last December, just a year and a half removed from gastric bypass surgery for weight loss. She has lost 130 pounds since the surgery and gained a tremendous amount of confidence on what she can achieve now by setting goals. She’s also gained an understanding of how to keep pushing for those goals even when your body wants to quit.

Moore’s journey to the half marathon began when she started joining Laura Beth Roberts and Leah Torisky in their Run for God class at First United Methodist Church in Red Bay.

“I think I started halfway through one of the classes,” Moore said. “Leah invited me to come and I was like, ‘Well, I can’t run but I’ll come for the devotion part.’”

She reached her goal, running her first 5K, which is 3.1 miles, in 49 minutes. From there she challenged herself to get faster.

“I did a couple 5Ks and then I was like, ‘You know what, I’m just going to sign up for this half marathon,’” Moore said. “If I don’t have a goal then I just feel like I’m not doing anything. So, I went ahead and signed up for it in June.”

The race Moore signed up for was the St. Jude Marathon Weekend half marathon in Memphis.

Getting to the finish line

From entering the Run for God class the first time to running a half marathon, Moore learned a lot about herself, and she learned the value of a great support group. That support was what helped carry her through training and propel her to the finish line. She found two great friends and allies in Roberts and Torisky in helping her when her confidence was weak.

“I would blow their phone up just asking them questions, saying I don’t think I can do this and they’re like, ‘no you can,’” Moore said.

Roberts, who Moore said has become a mentor, was a constant driving force for Moore, giving her tips and advice on preparing for the St. Jude race. She also found support from other friends and family members.

“Without those ladies, I probably would not have done it. From that experience I learned how important is it to have a support crew around you,” Moore said. “I personally do better with motivation. I had some girls that would go running with me throughout the week. And then those ladies would help me with tips and tricks and my family was way supportive because there would be days where I would be gone for three hours just running around town.”

One rainy Saturday in particular, Moore found her grandmother, Sally Moore, tracking her and making sure all was well.

“I think I was gone for almost four hours and my grandma would just drive by and just wait,” Moore said. “’I just want to make sure you’re okay,’ she would say. ‘Do you want me to pick you up?’”

For Keylee, the car ride was a thoughtful gesture but it would have also constituted an easy out and potentially have derailed her efforts – efforts she would not have dreamed were possible three years prior, or even right after her surgery.

“I didn’t think any of this was possible because when I started that Run for God class, I didn’t even know I’d ever be able to run a mile.”

Preparing for the half marathon wasn’t all smooth sailing. Moore was injured when she tore the labrum in one of her hips during training. It’s an injury that will require surgery soon to repair it, but Moore didn’t let it stop her from reaching her goal. At one point during the St. Jude half marathon a pop and sharp pain told her the situation had just gotten worse, and she wasn’t sure she would be able to finish.

“I thought I was going to call on my family to come pick me up,” Moore said. “I’m about to quit and I was like, ‘No. I’m already here. Only four more miles; I can do it.’”

During her first 5k, the Turkey Trot at First United Methodist Church, her goal was to just not finish last. For her second 5K, Moore’s goal was to finish it in under 40 minutes and run non-stop. Now, her goal for St. Jude had been to cross the finish line. Once again, it was faces of friends and family – and faces she didn’t know – that helped her reach one more goal.

“I was already emotional because it’s the St. Jude race,” Moore said. “You run through the hospital campus and all the kids are out there waving and saying ‘thank you.’ So, I mean you’re already super emotional. Much less anything personal you’ve accomplished, you get to say you’ve helped all those kids. Then, probably half a mile from the finish line I saw all my family and my boyfriend and everybody, and Laura Beth came and everybody was just screaming and I started crying there because I was like, ‘Oh Lord, my grandma’s crying.’”

Then, she saw the finish line – and no one was around.

“It was kind of cool because it’s just a moment to myself to think, you know, I did it,” she said.

After crossing the finish line Moore knows she is capable of reaching her goals when she sets her mind to it. She said that’s one thing everyone can do.