Seventy-five years to the day after his death during the final days of the Battle of the Bulge in World War II, a memorial will be held Saturday, Jan. 25, for Itawamba County native James Edward Blevins.

The memorial service will be held at 10 a.m. at Mt. Zion Cemetery off State Line Road in northeast Itawamba County, near the Banner Community between Tremont and Red Bay. The public is invited to attend the gathering, where information on Blevins’ life and time in the Army, including letters he wrote home to family members in the Banner Community and records of the battles in which he was involved, will be presented.

Organizer Larry Dill, who is a nephew of Blevins, and other family members will be in attendance. An Honor Guard is also expected to attend, with a graveside flag presentation concluding the ceremony.

“The purpose and focus of the memorial service is to preserve and perpetuate the memory of Ed Blevins, a 24-year-old, single, southern farmer, who went off to war during WW II, and never returned home,” Dill said. “I heard many stories about him as I grew up from my mother, his sisters, Ed’s father and mother and my uncles. There was usually a touch of sadness about the stories for they still grieved for Ed even though it had been many years since his death.”

Blevins was born and raised in northeast Itawamba County and later moved to Phil Campbell, Ala. At his death he was part of Company K in the 317thInfantry Regiment. The unit attacked German forces that had taken the town of Pintsche, Luxembourg. According to military records obtained by Dill, morning reports for January 24, 1945 indicate Blevins’ company was dug in on a hillside outside of Wilwerwiltz, Luxembourg and regimental documents indicate this was in preparation for a coming attack on Pintsch as a part of the 80thInfantry Division’s Sure River crossing. The 317thIR was part of the 80thID.

Morning reports from Jan. 25 described Company K’s attack on Pintsch and tell of the heavy casualties the unit had taken during the attack. Blevins was listed as Missing in Action three days later, on Jan. 28, after head counting was completed. On Jan. 31, 1945, Blevins was declared Killed In Action.

Blevins was buried at the American Military Cemetery in Hamm, Luxembourg. In 1947 the U.S. War Department (now known as the Department of Defense) gave Blevins’ father, James A. Blevins, the option of leaving Ed Blevins where he was or having his remains returned to the United States. Blevins’ family opted to have him returned, where he was re-interred at Mt. Zion Cemetery in Itawamba County where other Blevins family members are buried.

The 317thIR, along with the 80thID’s two other regiments, the 318thand 319thIRs, are considered the proverbial tip of the spear for smashing the Southern Shoulder of the German Bulge. The Battle of the Bulge/Ardennes was considered closed by the U.S. Army on Jan. 27, 1945, just two days after Blevins’ death.

Prior to his death Blevins was awarded the Purple Heart for injuries he sustained during battle in France on Sept. 2, 1944. Blevins was born January 15, 1921 in Itawamba County and drafted into the U.S. Army on January 18, 1942. He had attained the rank of Sergeant at his death. 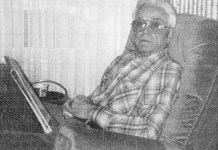