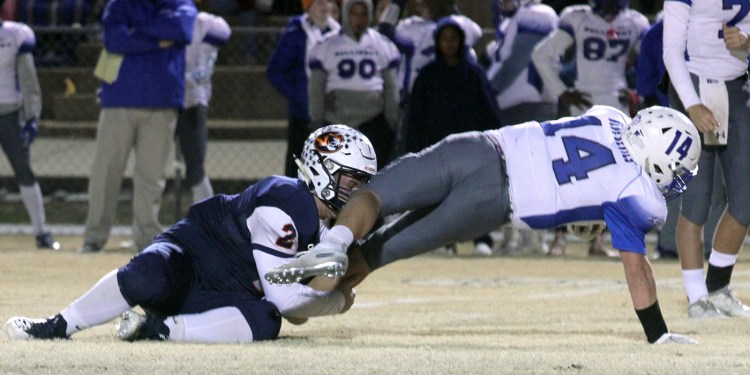 Logan Scott brings down a Blue Devil opponent for a loss in Red Bay’s second round of playoffs against Sulligent last Friday night. News photo/Bridget Berry

Red Bay’s undefeated Tigers continue to impress as they head into Round 3 (the first time in 12 seasons) of the playoffs against Fyffe.  The two undefeated teams will match up for what is sure to be a showdown under the lights Friday night in Fyffe.

Sulligent proved to be no contest for the Tigers last week.  The Blue Devils were held scoreless until only minutes left to play in the game.

The beginning of the game started in what looked like might be a pretty tight game.  However, with 3:02 remaining in the first quarter, the Tigers found a route that worked.  They sent Colyn Humphres on a six-yard run into the end zone to score for the Tigers. Humphres also scored on the two-point conversion.

Red Bay did not find another scoring opportunity until late in the second quarter.  With 37 seconds left in the first half, Humphres scored again, this time on an eight-yard run.  The two-point conversion was also scored by Humphres.  The first half score was the Tigers leading 16 to 0.

By the third quarter, the Tigers were running like a well-oiled machine.  The defense was stopping the Blue Devils on every play and the offense had found their rhythm, scoring three touchdowns.  With 7:49 on the clock, Jalen Vinson completed a two-yard run to put the Tigers up by 22.  An extra point pass to Alex Kennedy put two more points on the board.  With 3:55 remaining in the third quarter, Vinson ran a quarterback keeper into the end zone.  Vinson again saw an open path to the goal line and made a 10-yard touchdown run with 1:59 to play in the third.  The Tigers continued to hold the Blue Devils scoreless going in to the fourth quarter.

Red Bay, leading 36-0 starting the last quarter, would turn the quarterback position over to Blake Nix. Nix completed a two-yard run with 8:22 to go in the game.  Hunter King scored on the point after attempt with a field goal.  The Blue Devils scored their single touchdown with 3:30 remaining in the game.  Red Bay defeated Sulligent 43-6.

The Tiger defense held their opponents to only nine first downs in the game.  Junior, Cam McKinney led the Tiger defense with 10 tackles. Hunter Burks had 9 tackles, Jake Pounds had 8 tackles, and Braden Parker had 7 tackles.

Jalen Vinson completed 9 of 16 pass attempts for a total of 154 yards.  Red Bay’s leading rusher Friday night was Hunter King with 107 yards on 16 carries.  Vinson had 80 yards on 13 carries and Humphres had 33 yards on 10 carries.  The Tiger’s leading receivers were Arden Hamilton with 61 yards on 4 catches, Mason Holt with 59 yards on 3 catches, and Humphres with 16 yards on one reception.  Sulligent threw two interceptions and those were caught by Kaleb Bragwell and Elijah Luster.  Alex Kennedy and Jake Pounds each recovered fumbles by the Blue Devils.

The Tigers will travel to play at Fyffe on Friday.  Kickoff is set for 7 p.m.