Red Bay holds Addison as seconds tick off clock to get key win, 16-10 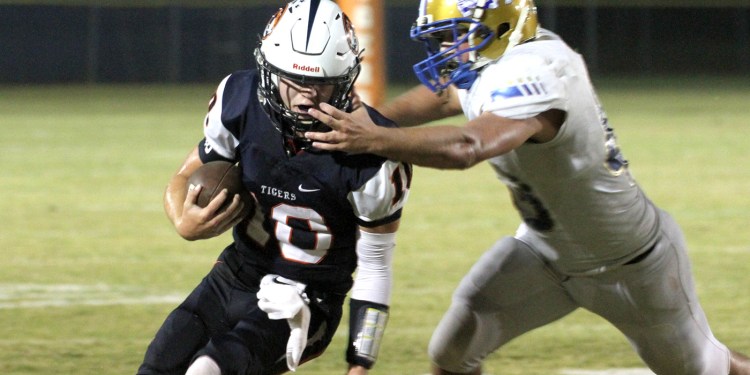 Addison commits a facemask penalty on Jalen Vinson as he runs the ball for Red Bay. News photo/Bridget Berry

﻿RED BAY – Although the game was a nail-biter to the very end, the Tigers picked up a big region win Friday night against Addison.

The Red Bay Tigers stepped up and played hard to win what might have been the toughest regular season game they will play this year. Once again struggling with penalties Friday night, Coach Jackson said that some of those were expected with the extra moving around he had going on during Friday’s game. In searching for match ups with the defense, the Tigers were moving to get more advantages, but all in all Jackson was pleased with how the team played.

Both teams came away scoreless in the first quarter, but the Tigers were first to score with 7:36 left in the second quarter when Jason Vinson made a nine-yard run into the end zone.  Colyn Humphres scored the two-point conversion.

Addison got on the scoreboard with only 57 seconds left in the half with a 20-yard field goal to leave the first half score, Red Bay 8, Addison 3.

The Bulldogs scored next on a four-yard run with 8:13 to go in the third quarter to take the lead from Red Bay. Addison’s extra point attempt was good, and the quarter came to a close with the Tigers trailing 10-8.

With 11:55 remaining on the time clock in the fourth quarter, Vinson made a two-yard run into the end zone to score for the Tigers. Humphres scored the two-point conversion to put the Tigers on top once again, 16-10.

The Tigers found themselves in a tough spot with just over 3 minutes remaining in the game.  The Bulldogs drove the ball to the Red Bay 5-yard line, but the Tiger defense held tough as time ran out for Addison. The Tigers walked away with the 16-10 win.

“Our guys really stepped up when they needed to and I’m very proud of them,” Jackson said.

Red Bay will be off this week but will host the Belmont Cardinals on September 27th.