Mrs. Barbara Weatherford Cashion, 82, of Red Bay, Alabama, passed away Thursday, September 12, 2019.  A native of Franklin County, Alabama, she was a retired Business Education teacher at Red Bay High School after 30 years of service.  Active in the community, she served as City Clerk of Red Bay from 1956 – 1961, and has been active in the operations of  Cashion Thermoplastics from 1996 – 2019.  She was also a faithful member of First United Methodist Church, Red Bay.

She was preceded in death by husband C.S. “Spot” Cashion and her parents, John Thomas and Mary Francis Plaxco Weatherford. 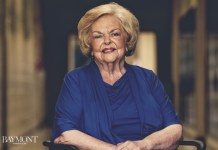 Barbara Cashion: From Vina’s glory days to a beloved teacher and mentor

Letter to the editor: From the Heart