Halltown | For the second time in two years, authorities found themselves in a standoff with Roger Nelson, Jr., and fortunately for all it once again ended peacefully.

Nelson, 32, of Red Bay, was taken into custody on Friday to face charges related to an alleged incident that occurred in August. Franklin County Sheriff Shannon Oliver said when U.S. Marshals went to serve the warrant for Nelson’s arrest Friday morning, he refused to leave the house.

“When they got there, there was a female with him and he refused to come out,” Oliver said. “Eventually she did come out, but he still refused. He had made some statements and they were concerned he might try to harm himself, but they were able to wait him out.”

Officers arrived to serve the warrant on Nelson around 8:30 a.m., and the ordeal lasted more than six hours before tear gas was used to drive him out of the home. It was the same location where Nelson held authorities at bay for more than three hours in February 2018. In the 2018 arrest, Nelson was charged with domestic violence suffocation, unlawful imprisonment, attempting the elude law enforcement and resisting arrest.

Nelson is still awaiting trial on those charges, and now faces additional charges of kidnapping-adult for ransom and resisting arrest. At press time Tuesday afternoon Nelson remained in custody at the Franklin County Jail. Bond was set at $50,000. 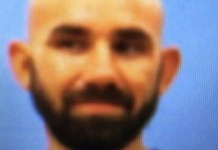 Red Bay holds Addison as seconds tick off clock to get...

Sheriff: Skull is from male; no missing persons from Franklin