Halltown | An altercation in Halltown last week resulted in a man being shot and injured, but a Grand Jury will decide whether the shooter will face charges.

It could result in charges for the man who was shot, and who also is still awaiting trial for an incident in February 2018.

Franklin County Sheriff Shannon Oliver said his department responded to a call to 91 Garrison Hollow Road on Monday, Aug. 12. There they found Barry Lofton, of Red Bay, waiting for officers after he allegedly shot Roger Nelson Jr., 32, of Halltown. Nelson had already left the scene.

It is believed that Lofton could have been confronting Nelson over a woman whom authorities say Nelson had abused. Oliver said there appeared to be an ongoing dispute between Nelson and the female at the residence, which could have sparked the altercation between Lofton and Nelson.

“In a nutshell from what we’ve put together there had been a dispute between Mr. Lofton and Mr. Nelson,” Oliver said. “He (Nelson) is going to be charged with kidnapping because he had taken (the woman) against her will and abused her. We don’t know if (Lofton) was doing it to protect her, but he shot him (Nelson).”

Oliver said after Nelson left the scene it is believed he had a friend take him to Red Bay Hospital and then on to North Mississippi Medical Center in Tupelo, where he was treated for internal injuries. Oliver said Nelson was shot once in the abdomen.

By Tuesday, Aug. 20, the District Attorney’s office believed Nelson had been released from the hospital.

Neither Oliver nor Franklin County Assistant District Attorney Jeff Barksdale could go into further detail on the allegations against either Nelson or Lofton, as the case remains under investigation.

“Due to the circumstances the D.A. wants to let a grand jury look into it,” Oliver said.

Nelson is currently awaiting trial on charges from an incident in the Burnout community in February of 2018 resulting in multiple charges. It is alleged he had abused another woman, then got into a standoff with authorities at a trailer at 510 Franklin 124. After more than three hours of talks with sheriff’s deputies, Nelson attempted to escape by cutting a hole in the floor and went underneath the trailer. He was charged with domestic violence suffocation, unlawful imprisonment, attempting the elude law enforcement and resisting arrest.

Barksdale said Nelson had been eligible for trial on those charges later this year after being indicted in February by a grand jury, but his trial date could possibly hinge on the latest injuries he received. 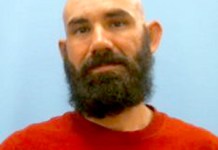