Red Bay | When “Finders Creepers” opens at the Weatherford Centre on Thursday night, a few new faces and a few seasoned performers will be on hand for the Bay Tree Council for the Performing Arts’ summer production.

Georgia Jeffreys is directing the BTCPA’s final show of the 2018-19 season. Written by Donald Payton, the comedy comes at a good time in Jeffreys’ life.

“This one’s been a little more of a challenge due to the time crunch of a summer play and with the things going on with my family. But this has been a good distraction,” said Jeffreys, who lost her mother, Rita, to cancer just more than a month ago.

Jeffreys is no stranger to the stage in Red Bay, having been in two plays and directed another. Still, with all the experience, she said she had butterflies leading up to Thursday’s opening. But this production has had multiple bonuses for her.

“I have loved working with the young people on this cast,” Jeffreys said. “And there is the dynamic of having two father-son duos as well.”

Longtime BTCPA member Joey Allen and his son, Chase, and newcomer Waymon Lee Heaps and his son, Nova Straub, will take turns in their roles delighting the audience. For Heaps, it’s his first time on stage, and he said he was working through some stage fright, but having fun. He plays Claude, who Heaps said injects some comic relief.

“I’m just outspoken,” Heaps said. “I’ll get out there and hope I can make it good.”

Hercules Nelson’s aunt and uncle invite Hercules and his best friend, Lucas, to spend the weekend with them. With suitcases in hand, the boys arrive at Uncle Bob’s to discover that Uncle Bob is a mortician and there’s a funeral scheduled Monday.

Well, it’s not long before things start happening in ways that would put most brave men to flight. For one thing, the corpse walks, reads the paper, and climbs into bed with Hercules. He gallivants around in a most uncorpus delecti fashion?

Needless to say, the boys are terrified until they find out that Mr. Quigley, the corpse, isn’t really dead. Someone tried to knock him off while he was sleeping so he devised a Plan: he’d make his family think he was dead, then show up at his own funeral and trap the guilty party. No doubt Mr. Quigley had a good plan and no doubt things would have ended peacefully, but there’s two things he failed to consider . . . Lucas Maxwell and Hercules Nelson. Fortunately, they all escape with their hides, but not before one of the wildest finishes ever!

Madelyn James, a junior at Red Bay High School, portrays Dr. Brown. It is James’ second role at the theatre.

“I’m over dramatic in general, so I just love acting,” she said. “It’s always something I’ve wanted to do. And my mom has always wanted me to be a doctor, so I guess I fulfilled her wishes,” she added with a laugh. “I have two different sides to me; a nice side and a mean side. It just fits the character.”

Emily Nelms, a junior home schooler, portrays Henrietta, a character with who she says she personally has nothing in common.

“I don’t think she has any personality,” said Nelms, who has done some performing with dance and drama at church.

Gracie Weatherford, who plays Nicole Quigley, is in her first production with the theatre. She said getting to know her fellow cast members has been the most enjoyable part of preparing for this week’s run of shows.

Scotty Kennedy contributed to this report. 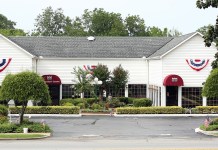 Final Delivery: Hester retiring after 32 years as clerk at Red...