LETTER TO THE EDITOR: Franklin County, we need your help in the accident which happened (in April 2018) and led to the death of Ramzi Ali Ahmed Alharazi, who was hit when he rode his bicycle and the person who hit him got away. If you know anything about the accident, please call the Red Bay police.

It was a television report which mentioned the accident which killed my Husband, Ramzi Ali, who was ideal of morals and respect. The trauma was very great principally since the police said that the criminal actor is unknown. It was a cloudy crime and byway realties. So the truth is not still clear. It is a dark crime on all sides. A lot of merciful hearts are thinking about the truth and they are hoping to find the criminal and discover the truth.

I am very wondering of American police, which police all criminals. Please don’t let me think this happens just In Hollywood movies. Perhaps finished months since killing Ramzi , but the police have not done anything except the news report which mentioned killing my Husband and request help from people. But they have not told me and his kids who is the killer. The Police and people in Red Bay called Ramzi as victim but I consider him as martyr.

Mrs. Kay Ivey, the Governor of Alabama, we believe that your great principles which you learned in your long professional life will stand next to the weak victim Ramzi , who considered himself part of Alabama. Ramzi told me much about Alabama and its kindly, great people, male and female. Franklin County is a great county as its name is in honor of Benjamin Franklin, the famous statesman, who established principles of justice, mercy and cooperation. I am asking if you have sons or brothers working in the far countries and you just heard a news report like me, what you can say, other than just cry? I am trusting that Governor Ivey and other local viziers in the state will consider Ramzi as her/his son or brother and they will spend best efforts to discover the truth. I won’t it said the sharpener women who is Ramzi’s neighbor is the only one in Alabama who stands next to Ramzi, “the poor victim.” I hope heard people said we are standing next to his family until we find the criminal. I believe that the words of Alabama’s anthem, which talks about the principles of mercy, cooperation and justice, will make everyone in Alabama become part in the story of truth, which we will together find it by God’s blessing. I trust everyone in Alabama, in Birmingham, Montgomery, Huntsville and Mobile, will be as a Yellowhammer bird who flying, searching about truth of life every day.

Finally, discovering the killer who killed my husband is the only way to make the kids of Ramzi smile and play as before he died, as they are crying at night and morning.

Please allow happiness and light to visit our home.

Publisher’s note: The Red Bay Police Department has not closed the investigation into the death of Ramzy Ali Ahmed Alharazy, 40, who was killed in a hit-and-run crash while riding his bicycle on Hwy. 19 south in Red Bay on April 27, 2018. Since that time multiple leads have been sought and followed up on. However, even the most promising leads have yet to result in the discovery of the driver or vehicle who hit Alharazy. Evidence collected late last year, thought to be a strong lead, was determined by Alabama’s State Crime Lab to not be connected to the case. Anyone who may have information on the case is urged to contact the Red Bay Police Department at 256-356-4455. 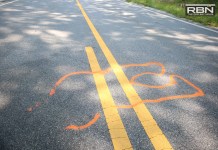