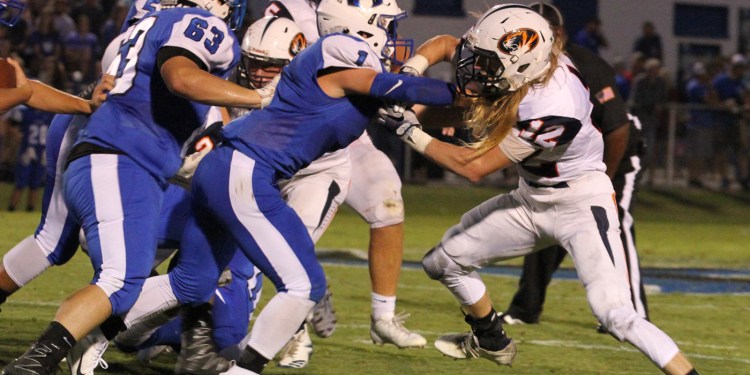 In Friday night’s match up against Hatton, Red Bay entered the field knowing that they squeezed by the Hornets last year by a mere 2 points in their 32-30 win.

However, with the experience the Tigers have returned with this year and the extra hard work they put into last week’s workouts, the Tigers dominated the first half.

Red Bay scored their first points of the game when Freshman, Levi Blanton pushed the Hornets’ quarterback 13 yards into the end zone for a safety.

The Tiger’s next scoring drive began at the Hatton 45 yard line.  With just over 4 minutes left in the quarter, Red Bay scored 6 points on a 4 yard run by quarterback, Kolby Bragwell.   Bragwell also collected 2 more points on the conversion to put the Tigers up 10-0.

The Hornets got the ball back, but quickly fumbled their possession away at the 47 yard line. Tanner Nichols was quick to recover the ball for the Tigers to set Red Bay up for another scoring opportunity before the quarter ended.  On a jet sweep play to the left side, Jalen Vinson scored on a 27 yard run for the Tigers with just under a minute to go in the 1st quarter.  Bragwell ran a quarterback keeper for the extra 2 points.

With a collected 18 points of their own, the Tigers left the Hornets scoreless at the end of the first quarter.  Colbie King, with 19 total rushes in the game, scored the next touchdown for Red Bay. King’s 10 yard run put the Tigers ahead 24-0.  Bragwell took the ball around the right side to score the 2 point conversion.

The end of the half again left the Hatton Hornets with no points and the Tigers with 26.

The third quarter resulted with no scores for either team.  In the fourth quarter, Colyn Humphres and Nichols forced a fumble from the Hornets on the 36 yard line.  Bragwell picked up the loose ball and ran it back for a 64 yard touchdown to put the Tigers on top by 32 points.

Bragwell had 14 rushes for 115 total yards against Hatton.  So far, the senior has racked up over 200 yards rushing in the first 3 games of the season.

The next and final points to go up on the scoreboard for the night, came from the Hornets.  They were able to complete a 20 yard pass to score 6 points.

King had a total of 60 yards Friday night, King has accumulated 250 plus yards on the season so far.  Vinson had 4 carries for 62 yards and one interception.  Humphres had 2 carries for 19 yards, Hunter King had 2 carries for 4 yards, and Cam McKinney had 3 rushes for 10 yards.  Leading defenders for the Tigers were Bragwell, McKinney, and Nichols with 6 tackles each.  Logan Scott had 4 tackles for Red Bay while Humphres, Blanton, and Raper each had 3 tackles.  Nichols recovered 2 fumbles for the Tigers.

“I’m really proud of our guys.  This was a good region win for us,” said Coach Michael Jackson.  “We’ve got some younger guys stepping up and that’s what we’re going to need going into the game against Addison.  We’re going to have to build our depth,” added Jackson. With a couple of players out with injuries, Red Bay had some players step into some unfamiliar positions last week. Offensive lineman, Levi Raper, was one of those players.  He filled the position of linebacker against the Hornets.  Levi Blanton also made some key plays for the Tigers last week.  This week, the Tigers travel to Addison (2-1), where the Bulldogs lost their first home game in three years this season to Piedmont.   This will be the first regional game for Addison this season.  Kickoff will be at 7 p.m.