Investigators have spent the past several days trying to piece together what happened. One thing that hasn’t helped is that there was little damage to Alharazy’s bicycle. Jackson said she had seen Alharazy in town on his bicycle a few minutes prior ot the accident and she said his flashing lights were working at that time.

“There were a few scratches on it, but there were no real signs of damage to the bicycle, so we don’t know if the chain was off it and he was repairing or what.”

Jackson said Alharazy suffered major head trauma. An autopsy was ordered to confirm the cause of death, but he was pronounced dead at the scene by Franklin County Coroner Elzie Malone.

Jackson said there was a witness who heard the impact, but more information is being sought.

“We need anyone traveling Hwy. 19 road around the time frame of the accident who may have seen something to call us,” Jackson said.

Alharazy was a part owner of Bay Mini Mart on Golden Road. Jackson said her department notified his family in Yemen on Saturday morning. According to someone on Facebook who identified as a friend of Alharazy’s, the family was not going to be able to have his body transported back to Yemen, but was instead going to have him buried in Birmingham.

On Facebook, several people posted of their personal experience with Alharazy.

“On Sundays I would buy gum before church and he always said to me, ‘On your way to church?’ and I would say ‘Yes!’ And he would say to me, ‘please pray for me my brother!’” Kevin Lindley said via Facebook.

“I seen him on a daily basis,” wrote Van White. “Always nice and polite. Sometimes I would talk to him for 30 minutes about random things. He would see my wife Teresa White and always compliment her on how good she looks and her perfume. I will miss him!”

Others said they hoped whoever did this would come forward.

“He didn’t deserve to go out like that, and I hope whoever did this grows a conscience and comes forward,” wrote Ruth Tucker Davis.

Anyone with information on the incident is urged to contact the Red Bay Police Department at (256) 356-4455. 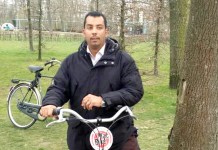 Family: Ramzi’s accident ‘a dark point in the sky of Alabama’