﻿Helping fight childhood cancer has become a passion for Red Bay’s Teresa Lawler. This December Lawler will be running as a St. Jude Hero in her fourth race to help raise money for the St. Jude Children’s Hospital in Memphis.

﻿It will also be her third one-half marathon, which is a 13-mile run.

“I keep doing this because of the kids,” Lawler said. “My inspiration is the children. I don’t want any parent to have to hear that their child has cancer, but it happens.

“I feel like it’s a small part that I do, but it takes everyone working together,” Lawler said.

Since the fall of 2013 Lawler has raised close to $13,000 for the fight against childhood cancer.

“The first race I signed up for I pledged five hundred dollars and I was really nervous when I did that,” Lawler said.

She then upped her distance to a one-half marathon and her pledge to $2,500.

“I thought there is no way that I’ll get that. I was expecting to have to pay because once you make a commitment they expect you to come through.”

Until recently Lawler’s runs have been through the streets of Memphis and through the campus of St. Jude. But this past April she ventured out and ran a one-half marathon in the ‘Rock ‘n’ Roll Nashville Marathon, where she surpassed her goal of $3,000.

“I liked the Nashville race. There were bands playing at every mile marker because of the Rock ‘n’ Roll theme. It was a lot of fun, but to me the Memphis run is all about St. Jude.”

Every time Lawler runs in a St. Jude race she meets and talks to parents and children who are being treated or have benefited from treatment at St. Jude.

“At Nashville, I met a woman whose daughter had cancer and was a patient at the hospital. Her daughter is in remission but the mom was still coming back to run in the benefit race for the hospital. She was that committed to continuing to help others.”

This past May, Lawler signed up as a VIP St. Jude Hero, the title that’s given to those who have run before and are returning to help with the fight against childhood cancer.

Lawler has been training and preparing for the December one-half marathon by running everyday.

Because of the summer heat she gets up very early before work and hits the road before the temperature starts going up.

“This whole experience has been so amazing,” Lawler said.

“When I start to think I can’t run anymore, I remember a 14-year-old boy I met named Adam,” Lawler said. “He had leukemia and he was having surgery the following Monday, but he still was in the race that Saturday.”

Lawler added that she knows she will always be involved with the St. Jude cause.

“If I can’t run anymore, I told my husband that I will still be there race day to volunteer to help anyway they need me.”

You can donate to Teresa’s run this December by going by the Franklin County Tag/Tax office next to The Red Bay News office, or you can search stjudeheroes.org and search for Teresa Lawler to make your donation.

The St. Jude website says the treatments invented at St. Jude have helped push the overall childhood cancer survival rate from 20 percent to more than 80 percent since it opened more than 50 years ago.

St. Jude is working to drive the overall survival rate for childhood cancer to 90 percent, and they won’t stop until no child dies from cancer.

Why fundraise as a St. Jude Hero?

Registration fees offset the cost of the race, but funds raised by St. Jude Heroes support the hospital.

The St. Jude Memphis Marathon Weekend is the single largest one-day fundraising event for St. Jude. It is one of the few marathons in the world owned and operated by a charity.

The fundraising efforts of St. Jude Heroes help ensure no family ever receives a bill from St. Jude for treatment, travel, housing or food, because all a family should worry about is helping their child live.

Go to stjude.org if you would like to participate or to donate. 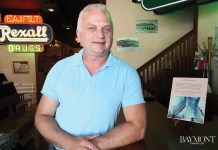 Barbara Cashion: From Vina’s glory days to a beloved teacher and...

﻿Lula Abston: At home in Vina