Remembering when snowy winters were not unusual in our area

We are under a winter weather advisory but we may have dodged the fluffy flakes that were forecast for us (they said we could get one to two inches and some icy spots on the roadways). As far as I can see by looking at the map, we are in the clear. I for one am elated that we missed the snowy weather. I like winter weather, but I liked it much better when I had someone to help me be sure we had plenty of groceries and gallons of water stored up in case the electricity went out. I have enough water on hand to last a couple of days and food that can be eaten without heating if necessary. I think that’s called being prepared.

I’m certainly not buying into the global warming theory, but the weather has changed somewhat. I recall in the 1960s, winters were so cold that we had at least one accumulating snow each month and sometimes more. The winter of 1960 was a particularly snowy year. We were out of school for more than a week, the mailman could not make it by our house, and the electricity was out for just as long. The first day or two was a adventure. The thoughts of sleeping late rather than boarding a cold school bus at 6:45 each morning made for sweet dreams.

The snow fell for two days before it let up. Pa Hughes and Jim had to shovel a path to the barn to do the chores and the rest of us stayed inside the house. There were white drifts as far as the eye could see. We truly were in an isolated, marshmallow world. Since the snow began in the middle of a school day our teachers insisted we bring our books home and study some each day so we would not be so far behind when we returned. It was not as easy to comprehend what was in those books without someone going over it.

During the day I read books, drew, wrote in my diary, studied my schoolbooks, or a combination of all. Mom had insisted that her wood burning cook stove be left in the kitchen when she upgraded to a modern electric range, so we had good hot food just like we did when we had electricity, and that was a blessing indeed.

At night the winter weather was more boring. Another reason I was more miserable at night was I had become a big fan of television. There were some excellent programs on then and I truly enjoyed watching them. No electricity, no TV, of course. When it seemed we would never see the ground (or television) again, the temperature warmed up and a soft rain fell. That took care of enough of the snow that the mail could be delivered, the electricity finally was restored, and, of course, school reconvened. Life took on its sweet sameness again, at least for a while. We had several bigger snows that winter, one coming on a Friday night when Jim had friends visiting him. They lived life on our hill for three days before they were able to make it home.

Moving ahead a few years, the winter of 1966 was one of the snowiest ever. On January 25th of that year, Ruble left going to Vietnam. When I returned home from taking him to the airport in Birmingham the snow was already drifting in banks along the roadway. The trip had taken twice as long as it normally would. It was almost dark when I drove in my parking place at home where I grew up. Pa Hughes was stepping off the porch with his boots, cap, and big winter coat on. He was getting ready to come see about me.

One year later when Ruble returned, it was raining a cold rain and it turned to snow before we got back to the house on Hughes Hill. But he was home, and I didn’t care how deep the snow was! Mom marked her calendar with an “X” on each day it snowed that winter (1967). There were a lot of Xs on her calendar!

I have a lot of memories of the winters when snows were much deeper than one to two inches. And I’m delighted to have missed this one . . . if indeed we have.

Tags: Remembrances from Route One

Its funny how animals have their own personalities 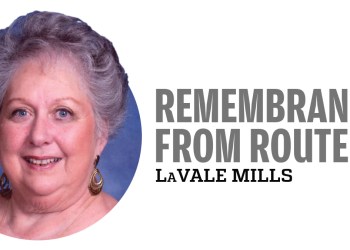