by Keith Ledbetter
in Sports
0 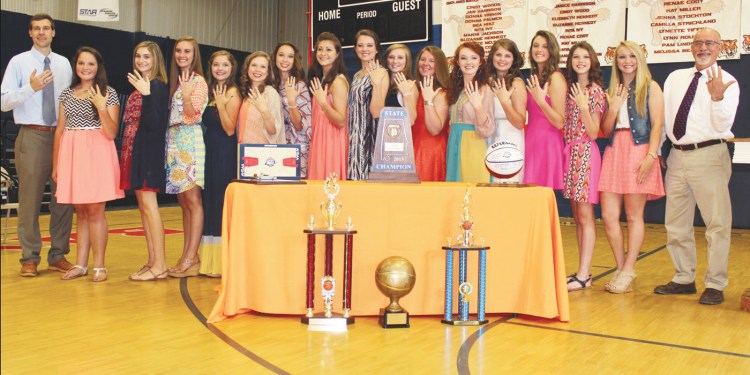 Last Wednesday, the Red Bay Lady Tigers came full circle back to their home gym to receive their state champion rings during a ceremony that honored them for their AHSAA 2A state championship 34-29 win over Geneva County in February.

Parents, family members and friends came out to join in the celebration that included the reading of resolutions from the Franklin County Board of Education and from Representative Johnny Mack Morrow and the Alabama House.

After congratulations from Red Bay Mayor David Tiffin and Red Bay High School Principal Kenny Sparks, the girls were called up individually to accept their rings.

“This is something that you’ll be able to show your children and your grandchildren,” said Mayor Tiffin.

“It’s a special day, especially for these young athletes.

“Throughout the state of Alabama, you can mention Red Bay to any sports fan and they will say something about the Lady Tigers’ basketball program, the coaches, the players and the state championship.

“You girls have something to be proud of. This ring is something you’ll get to keep all your life,” added Mayor Tiffin.

“When you put on that uniform, coach Roberts will tell you he expects to win a state championship every year,” said Red Bay Principal Kenny Sparks.

“He set his goals high.

As always, Roberts gives credit to his team and says his satisfaction comes when they hoist the blue map up for everyone to see.

“This has been a perfect year where everybody pulled together.

Roberts says he felt like this was Red Bay’s year, even during times when the girls weren’t playing so well.

“Even during those times, I knew that we were the best team in the state,” said Roberts.

“For the girls it didn’t hit them until they won the regional tournament and we beat Cold Springs.”

Roberts confessed to the team later that was the first time he had ever beaten a Cold Springs team.

The Lady Tigers already have started their summer practice program and will play their first play dates this Thursday at New Site.

Roberts has also announced his Lady Tiger basketball camp has been set for June 22nd through June 26th at the Red Bay gym. Sign up applications are at The Red Bay News office or you can call Roberts. Deadline for returning an application is June 19th. The $50.00 camp fee includes instruction and a t-shirt. 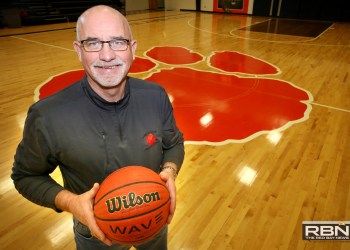 Legacy of a Legend: ﻿Donnie Roberts’ 45-year career draws to a close 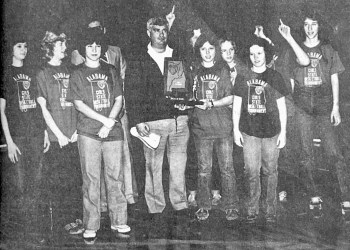