“I’ve got a feeling you’ll be back, but it will be a long time,” were the words his mother spoke to Evis Inman as he left for military duty in July 1940.

As Inman left for Hawaii that summer of 1940, little did he realize he would see the Japanese bombing of Pearl Harbor on December 7, 1941, and that he would not return home for five long years. Inman’s military service included the rebuilding of Pearl Harbor and the island-hopping strategy employed to loosen the Japanese hold on the Pacific that lasted until the dropping of the atomic bomb on Hiroshima.

Inman today is one of three Franklin Countians who survived the bombing of Pearl Harbor.

Inman went to Hawaii in 1940 with the 34th Engineers. He was among the first peacetime draftees in United States history. At that time Europe was already involved in World War II.

Inman recalled hearing President Franklin D. Roosevelt promise parents no draftees would be sent overseas. At the time the speech was given, the ship he was on was already three days out to sea on the way to Hawaii, then a United Slates territory.

The mission of his battalion was to build railroad tracks and new barracks.

When Inman arrived in Hawaii, he was stationed near the beach and Diamond Head.

“It was beautiful and peaceful,” Inman said “I was 21 and enjoyed being there. I had no thought we would be fighting in Hawaii.”

Questions remain in Inman’s mind concerning the attack on Hawaii.

“We were on Red Alert the two weeks prior to the attack,” he said. “On the Thursday before the attack the alert was called off; on Friday our guns were packed and locked up. Friday afternoon we received weekend passes.”

He still questions why the alert was called off.

Inman was on the beach the morning the Japanese attacked Pearl Harbor.

“We were taught to hit the ground when attacked,” he said. “I dropped into a washed-out area caused by the tide until the strafing stopped. The planes were so low I could see the grins on the pilots’ faces.

“I was scared to death,” Inman continued. “Sand was flying all around me from the strafing. I don’t recall exactly what happened or what I did with the pitcher of orange juice and glass I had with me.

“The attack lasted about two hours. It looked like the whole world was on fire from the ships and Scholfield base that were blazing. It was one scary time, horrifying, with no place to hide,” Inman remembered.

Inman praised his commanding officer, a fellow Alabamian from Sylacauga, with maintaining calm and a sense of direction in a world of destruction.

“The next day my outfit started working to repair the damage of the Japanese air raid. We worked seven days a week, 12 to 14 hours a day for eight months,” Inman said.

Inman’s company was changed from engineers to assault combat troops. A company of engineers was attached to an infantry or marine unit. They were responsible for equipment such as flamethrowers, magnetic mines, and explosives. As sergeant of headquarters, Inman was in charge of such equipment and its use.

Inman’s group would disembark from the mother ship in rubber rafts and place explosives in the coral reefs around the Pacific Islands to clear the way for the landing of U.S. troops. Inman moved from island to island as part of the U.S. plan to move from one island to the next and ultimately to Japan.

The five years without leave, the constant fear, the daily witnessing of horrible death and destruction left its impact upon Inman.

“It took me 15 years to recover without dreams and nightmares,” Inman said. “I got to where I didn’t care, I was mad and bitter. I was rough in those years after the war.”

Inman credits God, his mother and a gentle wife with recovery from his own “small hell.”

Some bitterness remains with Inman today, but he does not hesitate to say, “This is the greatest country on earth, and I would fight if we were invaded.” 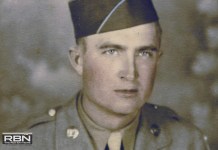 Pet shows owner is one of a kind