I know I may look like a fellow born in 1920 – which I was – or even a couple of years earlier. But I have the background of a man born at or even before the turn of the century. Now, don’t get me wrong. I’m not about to tell you that I believe in reincarnation.

What I’m saying is that while most fellows my age grew up in the “Roarin’ Twenties,” the “Thumpin’ Thirties” or the “Frantic Forties.”

I had most of those things too; but along with them I also had many of the things generally associated with the previous few decades.

I may need to define some of those terms; but, first let me add that I also experienced some other things that originated in earlier times but continue, some of them even surviving today.

Decorations, for instance, originated a long time ago, but folk here still have them at cemeteries every year – mostly in May, as any area Sunday School superintendent will tell you. (The May attendance is off.) That custom is still in vogue along the Tennessee Border from whence I came, but not all over the nation. Our church has had a pastor or two who were amazed at the May attendance at First Baptist.

Square dancing, for instance, is another activity that started in earlier centuries and continues through almost to the final decade of this one. A few folk still do it the old way with a fiddle band and a caller, but more of them now rely on canned music and calls set to it and done live. And instead of doing a kind of buck dance as they move, they mostly just skip or walk through it. Well, that beats stomping the floor and shimmying while you try to keep an eye on your partner.

I’m sure you could think of other activities that are similar to those two, but perhaps you’d rather I explain my original statement. It’s simple, really. I grew up in an isolated area where change came much slower. Some of the old English, Scotch and Irish folksongs were preserved better in the Southern Appalachians then in the land of their origin.

When I was 10 or 12, I actually saw a group of men in our neighborhood come together and build a log cabin for a man who was down on his luck. I think the logs had been hauled or snaked there earlier, but most of the work was done in one day. Now, I admit this was a rare event I think they did it just to see if they could. Two or three old-timers, though, had experience at it and were proud to show the young guys they did know to do it. I’m glad I got to see it, but wish I’d watched closer and remembered more about it.

And, believe it or not, Albany had a livery stable when I was starting to high school. Drummers who wanted to sell to the country merchants, like my dad, would come in, hire a buggy or wagon for their samples, and engage a local boy to drive and load or unload. People would ride their horses to town and put them in a stable there, where they were fed and cared for. You could rent a team or a riding horse, of course.

I think I told you once of the family feud that ended in a shoot-out on Albany’s court square, didn’t I? There were four killed, I think. That finished one side, and the feud, of course. Dad and I drove into town in our Model- T just minutes after it was over.

And, covered wagons? Yes, I had a few run-ins with one of those when I was a high school freshman. The road to town was so bad that I had to board five days a week with a family in town. On Friday afternoon, Buckem Parragin would drive to town and bring us home. He had a wagon with bows and a tarp over them and a very powerful team of mules. Believe me, he needed them! I never had to get out and push, even though the mud holes were axle-deep in places. Friday was fine, but we had to get up early o Monday mornings or go in Sunday night.

I could go on and on, but this should be enough to demonstrate to you why I is that I’m wise beyond my hears. No conceit in my family. I got it all. 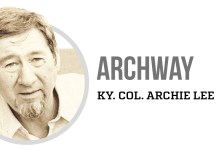 I Told You I’d Tell you so!

The precious gift of life