by Archie Lee
in News
0 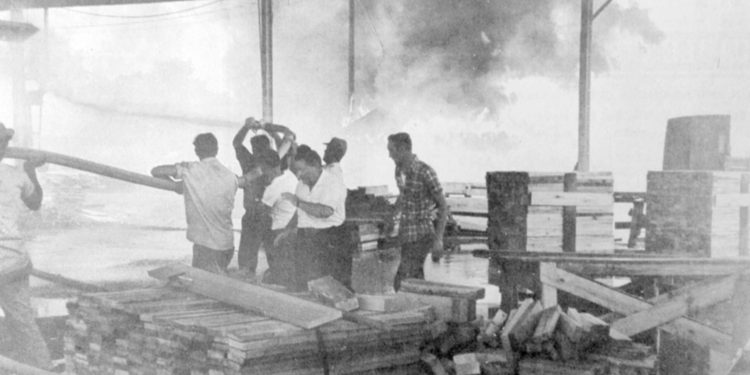 During the crucial few minutes recorded by this photo, Red Bay Volunteer Firemen braved almost blistering heat to keep the blaze from spreading to nearby buildings such as the planer building here. Owner Herman Keeton (white shirt, foreground) is shown with firemen. Vina’s fire truck arrived in time to assist with the firefighting also. (New photo/Archie Lee)

Last Thursday, June 13 (1968) during the lunch hour a fire was discovered that in about 30 minutes leveled a large warehouse at the Herman A. Keeton Lumber Co. in Red Bay.

Damage was estimated by the owner at more than $100,000. Besides the building, the fire also destroyed tools, mill supplies such as nails, and the entire stock of lumber, a good bit of which was said to be kiln dried moulding.

The fire was reportedly first seen at the north end of the building by workers having their lunch, who sounded the alarm.

Despite the tremendous heat of the blaze, there were no injuries reported.

Members of the Fire Department were commended highly by the company for preventing the spread of the fire to nearby buildings.

Neither the building nor any of its contents were covered by insurance, said the owner, Herman A. Keeton.